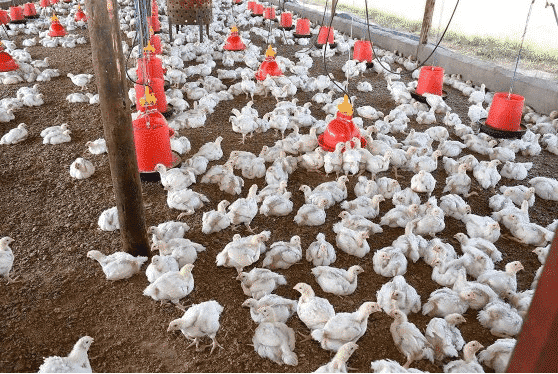 New research has shown that even low levels of mycotoxins found in animal feed have a direct negative impact on the performance of broiler chickens.

The longitudinal three-year study, a first of its kind in this field, was conducted by Oluwatobi Kolawole at the Institute for Global Food Security (IGFS) at Queen’s University Belfast, in partnership with agri technology company Devenish. Published in the Toxins journal of July 2020, the study demonstrated the negative effects of low levels of naturally-occurring toxic substances, i.e. mycotoxins found in animal feed, on poultry performance and health.

In a long-term feeding trial to evaluate the effect of low doses of mycotoxin mixtures, 18 consecutive broiler flocks were monitored on performance and feed intake. Photo: Chris McCullough

Oluwatobi Kolawole, lead researcher at the School of Biological Sciences, Queen’s University Belfast, said: “Mycotoxins are chemicals produced by fungi that can have serious effects on health, performance and the immune system of animals and humans if they get into feed or food. Whilst it is well known that mycotoxins at high levels negatively impact animal health, to date it has been difficult to accurately examine the impact these have at low levels.”

Kolawole therefore came up with a long-term feeding trial to evaluate the effect of low doses of mycotoxin mixtures on the performance of broiler chickens which were fed a naturally-contaminated diet. “We monitored birds over 18 flocks and continually examined the level of mycotoxins in line with the performance of the birds. Whilst the levels of mycotoxins were low, the mixture of those present throughout the study had a profoundly negative impact on bird health and performance.”

It is standard practice to test for mycotoxin contamination in feed by sampling feed ingredients. Agrimprove takes a different approach and looks at mycotoxin lesions in slaughterhouses. Product manager Kevin Vanneste explains.

The study showed that an increase in mycotoxins led to an increase in Feed Conversion Ratio (FCR). Increased levels of mycotoxins also led to a decrease in feed intake by the birds and a decrease in body weight. Professor Chris Elliott of the Institute for Global Food Security (IGFS), Queen’s University Belfast, added: “This piece of research, in partnership with Devenish, revealed fascinating results that are of crucial significance to poultry producers and will undoubtedly lead to future collaboration to further extend our knowledge in this field. Whilst regulatory levels of mycotoxins set by the EU are centred around safety, this study was centred around performance. The negative impact that mycotoxins had on bird performance highlights the importance of poultry producers being aware of even low levels of these toxins. Therefore, they must consider how they are going to mitigate even the impact of low levels of mycotoxins in their animals’ diet.”

Technological advancements for the detection of mycotoxins have exploded in recent decades. However, we are still missing the obvious: we haven’t yet quantified and thus, assessed the true exposure of animals to mycotoxins.

The study identified a specific mix of mycotoxins (DON, FBs, ZEN and DAS) which are relevant for poultry. “For that reason, we can conclude that the best way to combat the issue would be through an additive specifically designed to target poultry-specific mycotoxins,” said professor Elliott. Jonny Lester, Poultry Technical Manager at Devenish, said: “This significant piece of research allows us to offer our customers valuable insights into optimising their animals’ health and performance whilst also positively impacting their bottom line. We have calculated the impact of these mycotoxins on profitability. With FCR across crops differing by up to 14 points and each point of FCR resulting in additional feed costs, feeding a species-specific mycotoxin binder, such as SmartShieldAV, at low levels all year and increasing it as required, is likely to have significant financial benefits.”

Lester sees that there are also sustainability benefits to reducing mycotoxin presence in a poultry flock. Improvement in this area would reduce raw material input such as soya as well as the land use change associated with its use. Reduction in FCR would also have the potential to reduce nutrient excretion and its impact on the environment. “This type of ‘precision nutrition’ research, when applied commercially, allows our customers to get closer to the genetic potential of their stock and ultimately brings producers benefits across performance, profitability and sustainability,” Lester said.